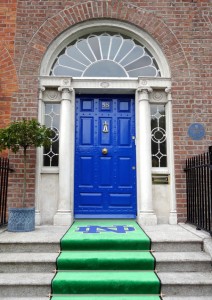 In central Dublin, not far from Trinity College sits one of Dublin’s most famous blocks of Georgian homes. Known as Merrion Square this area was once a stomping ground for many prominent Irish writers and poets. W.B. Yeats and Oscar Wilde both called this area home as children. Unlike Yeats, however, Oscar Wilde rests here in perpetuity, thanks to a boulder of white quartz, a sculpture of polished granite and the creative abilities of a local sculpture.

The Sculpture of Oscar Wilde in Merrion square was commissioned in 1997 by Guinness Ireland Group. They selected a site that allows the life-size statue of one of Ireland’s most famous sons to look out over his childhood home in Dublin, Ireland. The texture and colors of the statue can be surprising to guests. The artist used a combination of deep green nephrite jade and bright pink Norwegian thulite to create a somewhat dramatic flair upon viewing. The face of the statue is somewhat distorted, in that sculpture, Danny Osborne, created a face that represented the dual nature of Wilde. With that in mind, his face somewhat resembles the theatrical comedy/tragedy mask, showing a man who was often known to be both joyous and somber in life. It is a brilliant representation of a man who was often known to wade in his narcissism, dedicating his life to his own pleasurable pursuits, all the while creating misery and abject loneliness through his choice of partners and unsuccessful relationships.

The statue is flanked by two smaller bronze statues that sit upon granite bases, inscribed with quotes from Wilde’s work. One statue is an image of his pregnant wife, Constance and the second is Dionysus, the Greek god of vine and theater. These again were meant to represent the duality of life that seemed so significant in Wilde’s work throughout his career. Locals are particularly fond of this tribute as Wilde lived the majority of his life in England and was buried in Paris, but at the heart of his stories he was always connected to Ireland and his childhood home.

William Bailey In the News